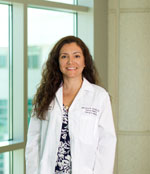 Associate Professor of Family Medicine and Geriatrics
Email
Office
College of Medicine, 4th Floor
E-mail
Mariana.Dangiolo@ucf.edu
IF YOU ARE A UCF HEALTH PATIENT OF THIS PHYSICIAN AND WISH TO COMMUNICATE WITH THEM, PLEASE USE THE PATIENT PORTAL.

Dr. Dangiolo began her career at Universidad de Buenos Aires and continued on to a Family Medicine residency at Universidad de Buenos Aires and then at the Mayo Medical School College of Medicine. She completed her training as a Geriatric Medicine fellow at Stanford University School of Medicine and served as Geriatrician at the Veterans Affairs Hospital in Palo Alto, California

Dr. Dangiolo dedicated part of her career to serving the American Indian and Latino populations and has served as Medical Director for the Indian Health Center of Santa Clara Valley in California and as a leader for the Diabetes National Collaborative.

In 2007, Florida State University recruited Dr. Dangiolo to serve as an Assistant Professor in the Department of Geriatric Medicine. In this role, she became faculty scholar for the Donald W Reynolds Foundation Grant for Geriatrics Education and started a Geriatrics assessment clinic at the Veterans Affairs Outpatient Center in Tallahassee.

UCF College of Medicine welcomed Dr. Dangiolo in June 2010. In her role as Associate Professor of Family Medicine, she serves as the Director for Geriatrics and Palliative Medicine, and is an active educator for the Practice of Medicine modules. She is two times recipient of the Richard Tucker Competitive Gerontology Research Award. Dr. Dangiolo is the only board certified Geriatrician at UCF Health.