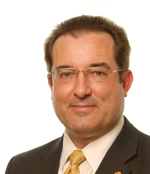 Charles W. (Chip) Roberts is the first development professional hired by the University of Central Florida College of Medicine and has served as the Assistant Vice President for Development since his hire in November 2007. His immediate assignment was to assist with the successful completion (over $7 million) of the Charter Class Scholarship Program, the first in the country ever to offer full scholarships to an entire class of medical students.

Prior to that, Mr. Roberts served as the first Director of Development for the Everglades Foundation in Miami, Florida, where he planned and implemented one of the most successful fund raising events in Florida, raising over $2 million in its second year. He began his career in 1986 with the University of Miami, during its historic $517 million capital campaign; at the time, the second largest in the history of higher education. He then spent over nine years at Florida International University as a development officer overseeing several academic areas and as the Director of Corporate and Foundation Relations. He has served as the chief development officer at the Zoological Society of Florida, the YMCA of Greater Miami and Sunrise Community.

Mr. Roberts is a member of the Association of Fundraising Professionals (AFP) of Central Florida and a past Vice President of AFP of Greater Miami. He is also a member of the Winter Park Rotary Club. A 1990 graduate of Leadership Miami, Mr. Roberts has presented fund raising topics to a number of community organizations, including Hands on Miami Leadership and the YMCA of Sao Paolo, Brasil. He is a graduate of The University of the South (Sewanee), with a degree in English literature. He and his wife Karen reside in Winter Springs, Florida with their four children.

B.A. English, University of the South