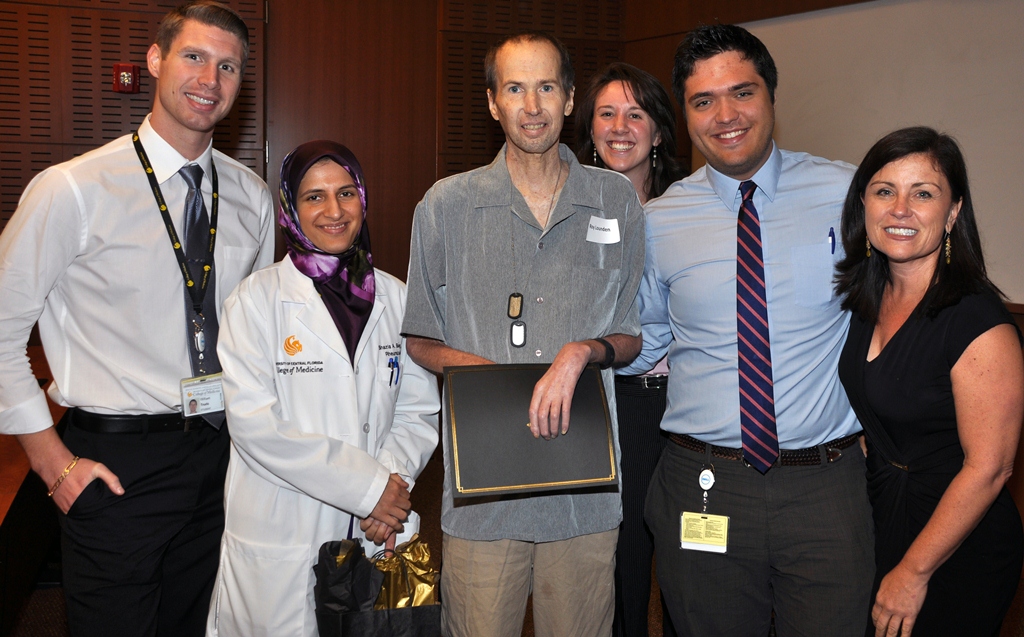 Roy Louden looks at photos of him lifting weights and remembers his “buff” years. Today, he struggles to get above 100 pounds. His hands and arms are frozen. His heart operates at just 20 percent capacity.

Louden, 52, battles scleroderma, a rare auto-immune disorder of the body’s connective tissue that can damage the skin, muscles, blood vessels and organs. The name of the disease comes from the Greek words “sclera” meaning hard and “derma” meaning skin. The systemic form of the disease that Louden has can damage the heart, lungs and kidneys. There is no cure and no known cause.

Louden faces those challenges with faith and hope because “I guess positive thinking is just my default setting.” And recently he shared that perspective with UCF College of Medicine students. Louden joined other patients with chronic diseases in speaking to students in the Practice of Medicine module because as module director Dr. Caridad Hernandez explained, “Our patients are our best teachers.”

Louden first began noticing itching and irritation in his skin in 2002 but attributed his symptoms to allergies and his work with materials at his job in theatrical special effects. Then the condition progressed. His hands became so cold when he was outdoors that he had to soak them in hot water to warm them. Then he began losing muscle mass and strength and had trouble using a hammer. He was diagnosed with scleroderma in 2005. The disease does not run in his family – his twin brother is scleroderma-free, reinforcing the belief of researchers that the condition may be caused in part by environmental factors.

Rheumatologist Dr. Shazia Bég cares for Louden at UCF Health, the College of Medicine’s physician practice. She has helped him deal with gastrointestinal and heart issues. Over the years, Loudon has had nine feet of intestine removed, been as light as 93 pounds and had a two different defibrillators inserted to stabilize his heartbeat. He provides free rent to two friends who help him with daily chores, including a pastry chef who works hard to help him stay nourished. Louden was delighted to gain a few pounds recently over Thanksgiving. He has been close to death multiple times. Dr. Bég says her patient’s positive mental outlook – which includes meditation – “is the biggest factor in why he’s come along so far. He knows there is no cure but he still stays positive and he spreads that positive attitude to other people.”

Louden says meditation and spirituality help him focus on enjoying the moment and not succumbing to fear of the future and the unknown. “I can’t say that a positive attitude and meditation will cure me, but I know that being negative will make my disease a whole lot worse,” he said. “I want the medical students to know that a positive attitude needs to be administered just as much as the medication.”