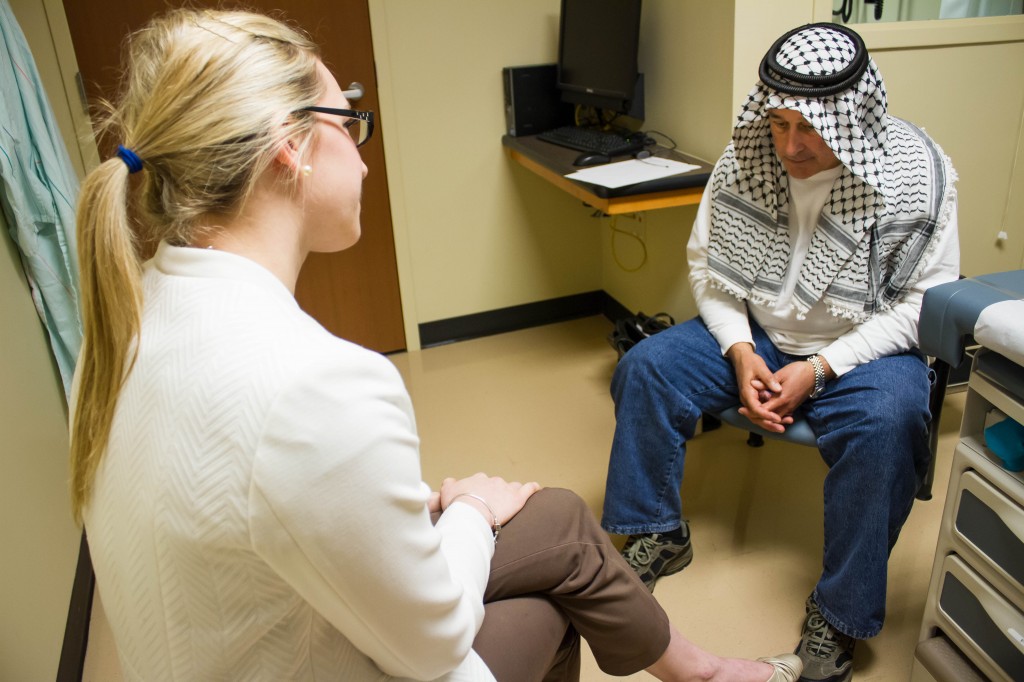 Nearly 30,000 refugees enter Florida every year, more than every other state in the union, and they arrive with unique health problems including malnutrition, infectious diseases and mental anguish from violence and displacement. In an effort to better train physicians to help their refugee patients, UCF College of Medicine students focused on refugee health at their third annual Global Health Conference February 1.

More than 100 students from every Florida medical school, nursing students, healthcare professionals and medical students from as far away as Oklahoma participated in the event.

“We wanted something that encompasses both a global aspect, but also something that we can manage everyday here in America,” said second-year UCF medical student Scott Furer, who helped lead the event.  “We’re going to be seeing these types of patients all the time in our future practices.”

The keynote speaker was Dr. Rick Hodes, who has worked with Ethiopian refugees for more than 20 years. Through his work with the Jewish Joint Distribution Committee (JDC), Hodes has been in charge of the health of Ethiopians immigrating to Israel. Over the past two decades, he has served populations in countries like Zaire, Rwanda and Albania as they faced war, genocide and illness. Dr. Hodes detailed those experiences,  including a deadly Cholera outbreak in Rwanda, and the Goma-Zaire genocide that resulted in more than a half-million deaths. “Sometimes things are just unexpectedly crazy,” he said. “But you have to really be dedicated, you have to do the work, and you have to be able to work well with others.”

A panel of actual refugees from around the globe described their experiences moving to the United States. Hailing from countries like Iraq, Cuba and Egypt, one of the panelists had only been in the United States for two weeks, after emigrating from Myanmar.

Many fled their home countries because war and political conflict threatened the safety of their families. “The place I came from is filled with violence, and it is unpleasant for many people,” said Ali Al Shammarl, a recent refugee from Iraq.  “You have your family, your job, and at one point, you have to decide to leave all of that behind and go into the darkness.”

Their stories of pain – and hope through the assistance of Catholic Charities of Central Florida – were especially impactful to conference participants.  “I lot of people thought it was an eye-opening experience because they didn’t know there were so many refugees around us,” said second year UCF medical student Neesha Patel, another conference leader.  “It makes you think more about the people that you’re treating. There could be something else going on in their lives.”

The second half of the day involved workshops and simulations.  A giant hospital tent stood on the front lawn of the College of Medicine, filled with actor-patients wearing professionally-applied makeup to simulate illnesses like jaundice and cholera. Others had bloody gashes and lacerations from an earthquake. Conference attendees interviewed and triaged the patients, often dealing with language barriers and panic.

In the Clinical Skills and Simulation Center, students interviewed costumed standardized patients – actors displaying symptoms of PTSD after coming to the United States from Syria. PTSD is a common mental health issue for refugees dealing with the combined stress of violence, natural disasters and leaving their homeland and support network, said College of Medicine Professor Dr. Martin Klapheke, a psychiatrist by specialty who led the simulation.  “It definitely takes the student out of their comfort zone because not only are they doing medical interviewing, but they have to look through the lens of how the trauma’s affecting the presentation, how cultural differences are affecting the presentation, and how being a refugee further complicates the presentation.” Dr. Klapheke said. After the simulation, the standardized patients provided feedback to the students. They urged the doctors-in-training to give them a chance to grieve before going on to the next question and praised them for not being put off by their angry outbursts and guilt.

The conference was made possible with the help of Diebel Legacy Fund at the Central Florida Foundation. The  organization was founded by the family of the late Dr. Don Diebel Jr., who was killed after stopping to help accident victims on the Florida Turnpike. The charitable group’s goal is to provide humanitarian support both domestically and abroad and to honor the good Samaritan role that Dr. Diebel embodied. His father, Dr. Don Diebel Sr. helped introduce the day’s events by saying,  “We welcome the opportunity to support the development of physicians who share these values of the Good Samaritan as exemplified by Dr. Diebel Jr. You’re fortunate to be in a place where your intelligence and curiosity can really be developed and allowed to blossom.”

Many of those students in attendance are members of MedPACt, a UCF College of Medicine group for students who are interested in caring for local and international communities in need. Dr. Deborah German, vice president for medical affairs and dean of the medical school, commended the students for their commitment to service.  “Whether you serve patients overseas or practice medicine in your hometown, you will see patients from all over the globe whose life experiences are drastically different from your own,” she said. “To be a healthy community, we must ensure that the weakest and the most in need receive compassionate and quality care.”