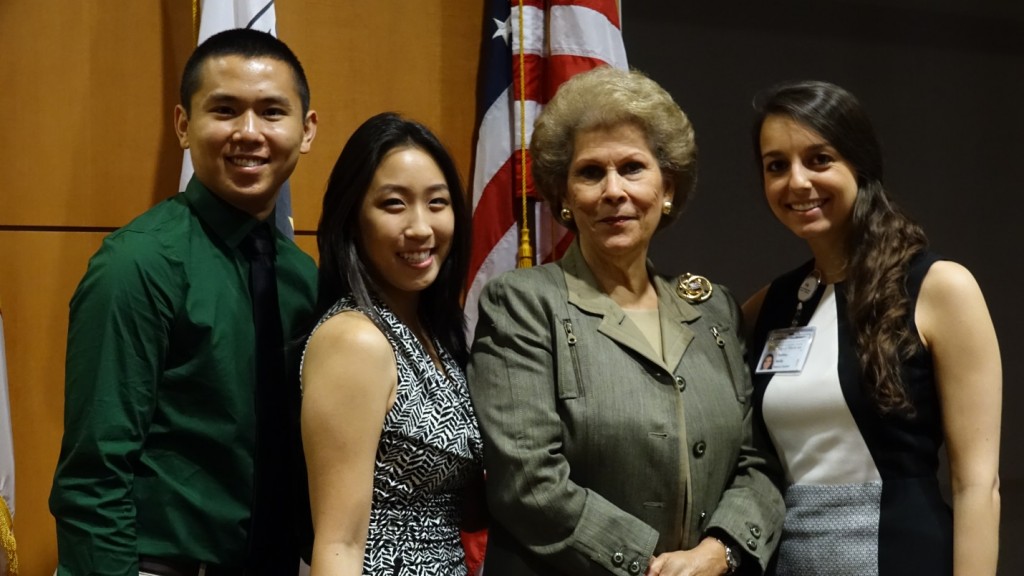 Former U.S. Surgeon General Dr. Antonia Novello opened the College of Medicine’s third-annual Global Health Conference January 31 with this promise about maternal and child health in the developing world: “I’m going to challenge you, and then I am going to leave you a little bit angry.”

Dr. Novello spoke to almost 200 medical, nursing, pharmacy and public health students from across Florida on the precarious health of women and children in many parts of the world. She spoke on topics including domestic abuse, child marriage and birth, honor killings and female genital mutilation. “The most important thing is women’s health in the global arena,” she said. “When the health of a woman collapses, the health of the family where she lives collapses as a consequence.”

Despite this fact, Dr. Novello said women’s health is often ignored and violated, especially in the area of female genital mutilation, where the World Health Organization (WHO) says more than 125 million women and girls alive today have had all or part of their external genitalia removed. The mutilation is practiced worldwide, but is concentrated in Africa and the Middle East. In some countries such as Egypt, 91 percent of females are mutilated. Cultures in these areas of the world believe mutilation guarantees purity in a woman by making sexual intercourse nearly impossible before marriage. Dr. Novello showed a photo of young girls lying in a line in the dirt, each waiting for their turn to be mutilated in what is a cultural pre-puberty ritual. “Someone without their hands washed cuts the basic organs of your life,” she said, noting that such mutilation can cause infections including AIDS, infertility and even death through hemorrhagic shock. “Genital mutilation is a dangerous violation of rights, it infringes on the women’s ability to be protected from torture,” she said.

Dr. Novello served as the U.S. Surgeon General under President H.W. Bush from 1990-1993, and is now Executive Director of Public Health Policy at Florida Hospital. She also has served in leadership roles with UNICEF. She told students that legislation to end atrocities against women has been minimally effective. “I am so tired of seeing resolutions from the U.N. about women’s health—and nothing is happening,” she said. She spoke of the Beijing 1995 U.N. Conference where worldwide leaders made resolutions to empower women and improve their health through social, economic and political change. Nearly 20 years later, she said, such progress has been sluggish at best, especially in developing countries.

This year’s Global Health Conference was designed to educate students across the health professions on the health challenges women and children face worldwide. During Dr. Novello’s speech, several students asked what they and their colleagues could do to end such practices. “This is the most disgusting thing I have ever seen. It makes me so angry to see that it is still happening,” said recent UCF nursing graduate Geraldine Martinez, who learned about female genital mutilation through stories passed down from family members in her native Nicaragua. Dr. Novello reiterated that knowledge is power. “For the women who have escaped this—education seems to be the way out,” she said.

UCF College of Medicine Associate Professor and Director of International Experiences Dr. Judy Simms-Cendan echoed that sentiment, adding that the Internet as a communications tool can be a powerful ally in changing women’s health worldwide. “You have something that our generation did not—you have social media,” she said. Dr. Simms-Cendan’s international travels to provide healthcare and medical education to places like Ethiopia and the Dominican Republic have shown her that residents even in developing countries have cell phones. “Start to develop social campaigns that can help educate in a culturally sensitive way,” she said.

Cultural sensitivity was a point Dr. Novello also emphasized, saying that one of the biggest obstacles in making change is because many practices that harm women are rooted in cultural and religious beliefs. Like Dr. Simms-Cendan, she suggested students educate their patients about issues like domestic abuse and genital mutilation with respect rather than judgment. “Please remember that you can never practice medicine if you do not know the culture of the people you are tending to,” she said.

In closing, Dr. Novello challenged the students to take action by sharing with them this Nigerian proverb: “Not to know is bad. Not to want to know is worse. Not to care is unforgivable.”