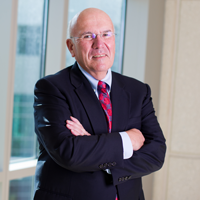 Dr. Dick Peppler was appointed Associate Dean for Faculty and Academic Affairs and Professor of Anatomy at the University of Central Florida College of Medicine in August 2007.   He was appointed as interim chair for the Department of Medical Education from 2007-2010 and served as interim director for the Burnett School for Biomedical Sciences from 2012-2014.  He received his BA from Gettysburg College and his PhD from the University of Kansas Medical Center, and was a faculty member at the LSU Medical Center, Quillen College of Medicine at ETSU and at the University of Tennessee Health Science Center before coming to UCF.

At ETSU, he was founding faculty and Associate Chair of the Department of Anatomy, and at UT, he served as Associate Dean for Academic and Faculty Affairs for 22 years and as Dean of the College of Graduate Health Sciences for 10 years. As Dean, he was responsible for 7 graduate programs with over 350 graduate students and 400 graduate faculty. As the Associate Dean at UT, he was administratively responsible for over 2,100 faculty appointed in various positions and located at training sites throughout the state of Tennessee. He had direct responsibility in the College of Medicine for (1) the specific academic programs for 600 medical students; (2) the development and management of the curriculum; and (3) the processes of appointment, promotion and award of tenure for faculty. Peppler has over 75 publications in the area of reproductive physiology and medical education. He was recognized at ETSU in 1984 as a Distinguished Faculty Member and in 1994 by the University of Tennessee Alumni Association with their outstanding teaching award. In addition, he has received many teaching awards from students at LSU, ETSU and UT.

Dr. Peppler served on active duty during the Vietnam conflict at Fitzsimons General Hospital in Denver and during Operation Desert Storm at Fort Campbell, Kentucky. He retired in 1999 from the USAR with over 35 years of service.