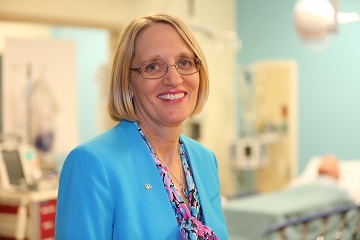 Diane Davis Davey is Professor of Pathology, Associate Dean for Graduate Medical Education, and a part-time pathologist at the Orlando Veterans Affairs Medical Center with specialty expertise in cytopathology and hematopathology. She was the Founding Designated Institutional Official (DIO) for the UCF/HCA Healthcare GME Consortium and is involved with efforts to build new residency programs in Florida. Dr. Davey is a Past-President of the College of Medicine Faculty Council, served as Interim Chair of the Clinical Sciences Department in 2015-16, and is a member of COM Enterprise. Dr. Davey teaches in several medical student modules including the S1 Hematology/Oncology module.

Diane is Chair of the American Society of Cytopathology (ASC) Awards Committee, a member of the ASC Foundation Board and Past-President’s Advisory Committee, and an ASC representative to the Cytopathology Education and Technology Consortium. She is a board member for the Florida Society of Pathologists and delegate to the College of American Pathologists House of Delegates.  She is a Past-President and Trustee of the American Board of Pathology, the certifying board for pathologists, and a past member of the Pathology Residency Review Committee for the Accreditation Council for Graduate Medical Education. She was President of the American Society of Cytopathology in 2001-2 and served as a moderator for the National Cancer Institute (NCI) Bethesda 2001 Workshop for Cervical Cytology terminology. She has served on several committees of the American Society for Colposcopy and Cervical Pathology, and has been a society representative for guidelines for cervical cancer screening and management.

She has been an advisor for both the FDA and the NCI,and serves on editorial boards for three journals. Her research efforts have focused on cervical cytology and quality improvement efforts in laboratories, including uniform reporting terminology, new cytology laboratory technologies, laboratory and patient management guidelines, and also on educational and competency assessment.